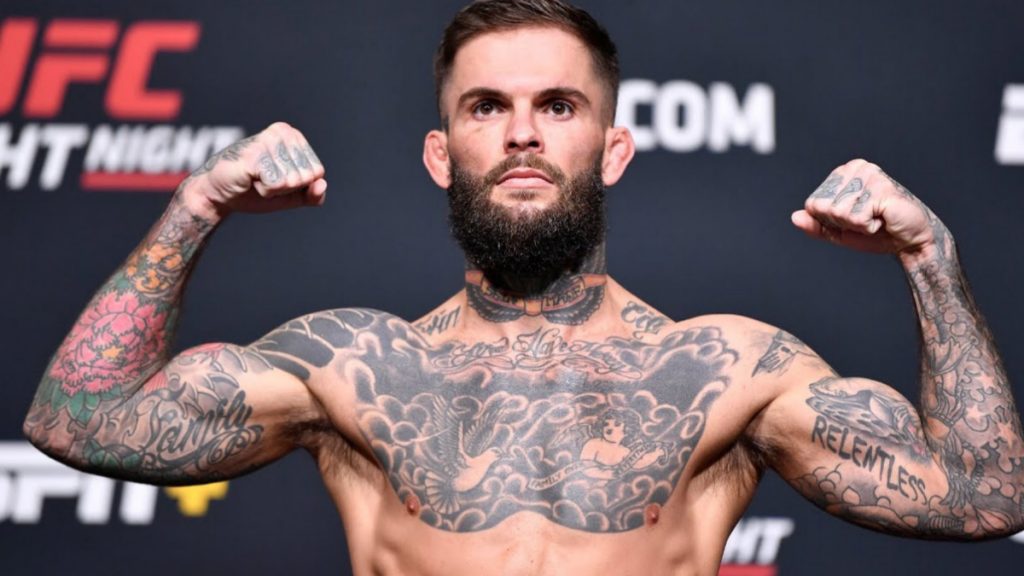 Cody Garbrandt’s net worth in 2022 is estimated to be approximately $2.5 million. It is reported that Cody Garbrandt has earned most of his net worth by fighting for the UFC and many other MMA promotions.

Cody Ray Allen Garbrandt is a 30-year-old American MMA fighter who competes in the UFC’s flyweight and bantamweight division.

He is a former UFC bantamweight champ. He won his belt from Dominick Cruz at UFC 207. He held his title for 10 months until he lost to TJ Dillashaw at UFC 217.

Cody Garbrandt’s height is five feet, eight inches. After many back-to-back losses at poundweight, he has moved down to flyweight.

According to various sources, Cody Garbrandt’s total career earnings till year 2022 are reported to be around $1,633,600.

At UFC 269, Cody Garbrandt fought Kai-Kara France in a potential title eliminator bout. He suffered a KO loss in round number one.

This was Cody’s last fight at UFC Bantamweight. He lost a unanimous decision to top bantamweight Rob Font.

At UFC 250, Cody Garbrandt defeated Raphael Assuncao by knockout in round number two.

In this highly anticipated rematch bout, TJ Dillashaw knocked out Cody Garbrandt by TKO in round number one.

At UFC 217, Cody failed to defend his title against his bitter rival, TJ Dillashaw. He suffered a TKO loss in round number two.

Cody Garbrandt defeated Dominick Cruz by unanimous decision in five round war. He won the championship in this bout.

At UFC 202, Cody Garbrandt fought Takeya Mizugaki. He won this fight by a first-round knockout.

Cody Garbrandt is a UFC flyweight/bantamweight fighter with a mma record of 12-5-0. He is still actively competing in the UFC and his record will grow with his upcoming fight.

Cody Garbrandt’s next fight is scheduled on July 9, 2022 against Brazilian fighter Rani Yahya.

In July 2017, Cody Garbrandt was married to his longtime girlfriend, Danny Pimsanguan. They have a son named Kai Fisher Garbrandt.

Cody Garbrandt was born in Uhrichsville, Ohio, USA. Cody’s father was a drug addict and spent most of his life in jail.

He has been raised by his mother, Jessica, and now husband, since he was 10 years old.

Cody and his elder brother Zach began boxing training under the instruction of their uncle Robert Meese, who was an Olympic alternate in boxing.

During his school time, Cody won his first state wrestling championship as a freshman in 2007, by defeating Zach Neibert, 4–2. He was also a runner-up in 2008.

on January 3, 2015, at UFC 182. Cody Garbrandt made his debut against Marcus Brimage. He won this fight by TKO in the third round.

In his second fight, Cody defeated Henry Briones by unanimous decision in a three-round war at UFC 189.

On May 29, 2016, Cody headlined UFC Fight Night 88. He fought the undefeated Thomas Almeida and defeated him by TKO in round number three.

What is Cody Garbrandt Net Worth?

Cody Garbrandt’s net worth in 2022 is estimated to be approximately $2.5 million. It is reported that Cody Garbrandt has earned most of his net worth by fighting for the UFC and many other MMA promotions.

Who is wife of Cody Garbrandt?

When is the next fight of Cody Garbrandt?

Cody Garbrandt’s next fight is is scheduled on July 9, 2022 against Brazilian fighter Rani Yahya.

No, Cody Garbrandt is still actively fighting in the UFC. He is just 30 years of old and still pursuing to capture UFC gold.

How tall is Cody Garbrandt?

How old is Cody Garbrandt?

Where is Cody Garbrandt from?