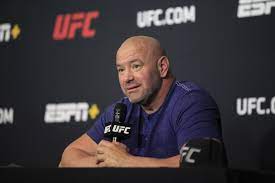 Nate has been teasing his next fight since last month where he tweeted that he is looking to fight in the december.

Recently, Nate has also teased interest in fighting tony by tweeting his photo without any caption.

This tweet of Nate, hit the MMA fans like a storm. After that, the discussion of Nate Vs. Diaz started in the community.

Speaking to reporters Dana White has addressed the situation of Nate diaz. He stated “Yeah, he’s got one more fight. We are working on a fight for him.” Dana made it clear that Nate has one fight left on his contract.

Dana also given update on Nate Diaz Vs. Tony Ferguson “Tony (Ferguson) wasn’t one of the guys we were working on, but we are working on a fight for Nate now. He’s got one fight left.” Said by Dana White.

If not Tony then i think Diaz has only two options, either to fight Vincente Luque or Wait for Triology with Conor McGregor.

For Tony, Conor can also be next fight as they both have already started a feud on twitter.

Tell us in the comment, who you think should Nate fight next?.