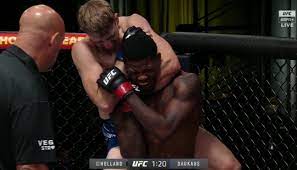 As a fan, like it or not like it but it is the bitter truth that the fight has ended in such unfortunate way.

Yes, what crazy fight show it was. Referee Dan Miragliotta called for instant replay to review the accidental head butt situation after Kyle daukaus submitted Kevin Holland in round no 1.

After replay, Nevada athletic commission turned the submission invalid and declared the bout to be no contest.

This incident was gathered mixed reactions from the MMA world and following is the quick list of MMA Pros reacting to this incident.

Before we start a quick reminder to you if you haven’t seen kevin hollands reaction to this fight click here to read it.

Former American football linebacker Turned UFC Middleweight “Ya Boi” Eryk anders has also shared his views on twitter. He believes that they should run it back.

Kevin Holland’s wrestling guru Daniel cormier has got his back on twitter see what he said in below embedded tweet.

Want to hear something exceptional?  UFC Bantamweight Brian Kelleher has got something for y’all.

Overall, it was a great show last night. If you like the article kindly support us by subscribing or turning on the notifications.

If you haven’t yet checked out our UFC 267: Islam Makhachev vs Dan Hooker fight preview then you should click here.