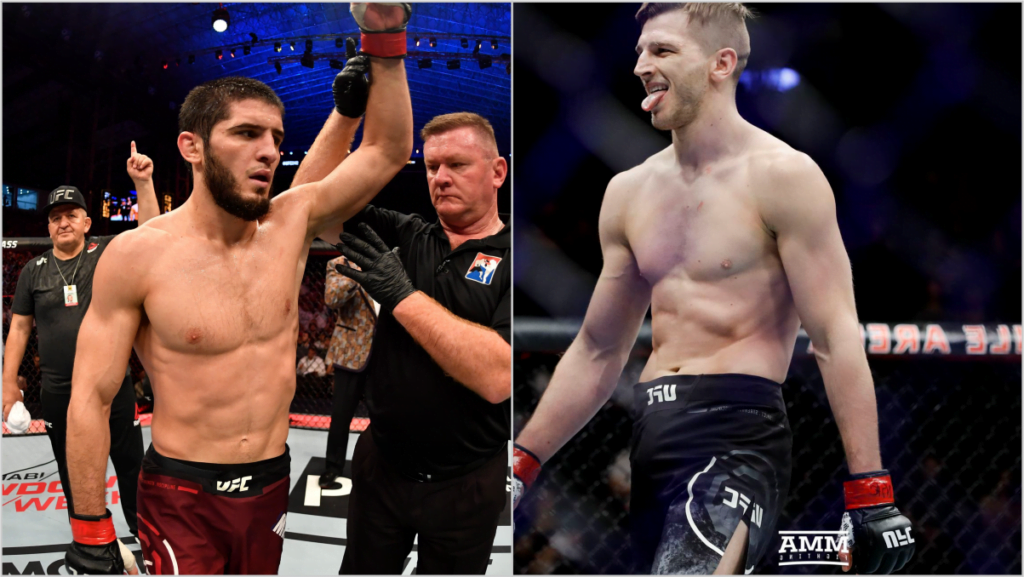 UFC 267, As UFC returns to Abu dhabi. A top contender lightweight bout is modified/added to the card.

Islam vs Dos Anjos was officially scheduled for this fight but due to unfortunate injury once again dos anjos has pulled out of this fight.

Following his injury, RDS will be replaced by Dan hooker. This is how the fight came into the picture. Hat’s off to the Dan hooker for taking this on a quick return.

Before getting into the fight preview checking the rank of both the fighter is must.

Islam Makhachev entered top 10 ranking with his last victory against Thiago Moises. He’s currently ranked as no 5 lightweight in UFC.

On other hand dan hooker just fought and won a bout against Nasrat Haqparast at UFC 266. He’s currently ranked as no 6 lightweight by UFC.

At this point of time we have no idea why this card is taking place. Aye, don’t take me wrong but see this way. We have Dustin Poirier as a no 1 contender for title. Then we have Justin Gaethje vs Michael Chandler scheduled on UFC 268. Which is potentially for no 1 title contender too?

This is crazy, I think the only reason this fight is taking place is because the event is happening in adu dhabi and they need a home guy. Yeah I know, islam is Russian but for now abu dhabi is the home for Russian fighters.

I think the winner will be placed over beneil dariush at no 3 rank and winner of Gaethje vs Chandler will get next title shot and we will have dustin waiting for another money fight against conor.

Now that we know intention of putting this card, let us move smoothly to fight analysis.

Both fighters are 30 years old and we can say they are in their prime now. However, Islam Makhachev just like his brother Khabib Nurmagomedov having almost perfect record in his career.

Having perfect record tell us the winning mindset of the fighter. On other hand Dan Hooker has 10 losses on his fight resume. See, when you are fighting hardcore wrestling guy you must have no quit policy in your mind.

We know Islam’s wrestling is not as good as khabib but at the same point we don’t see Dan is having a time to prepare to stop those takedown attempts of Islam.

No disrespect to Dan Hooker but I see this fight ending on ground with islam on the top.

Does Dan Hooker have a chance against islam?

Yes, there is the possibility Dan can turn this fight in his way. All he has to do is that he needs to play this fight on his way and stop the early takedowns attempts.

The only way Islam defeated was by a KO, Dan either can win this fight by KO or may be by decision. But to take away decision victory Dan will have to stop all the attempts of takedowns which he cannot and that’s why he has to go for KO.

But the problem is like all the wrestlers in MMA, Islam holds his chin and neck tight so he can take big blows and recover instantly. So to make him fall Dan needs to use kicks. Flying knee, Head Kick moves like those can only make Islam fall.

Alright guys, those were my views on this fight. You all can have different view on this fight. Fight can go either way now let’s wait for the fight to see what actually happens.