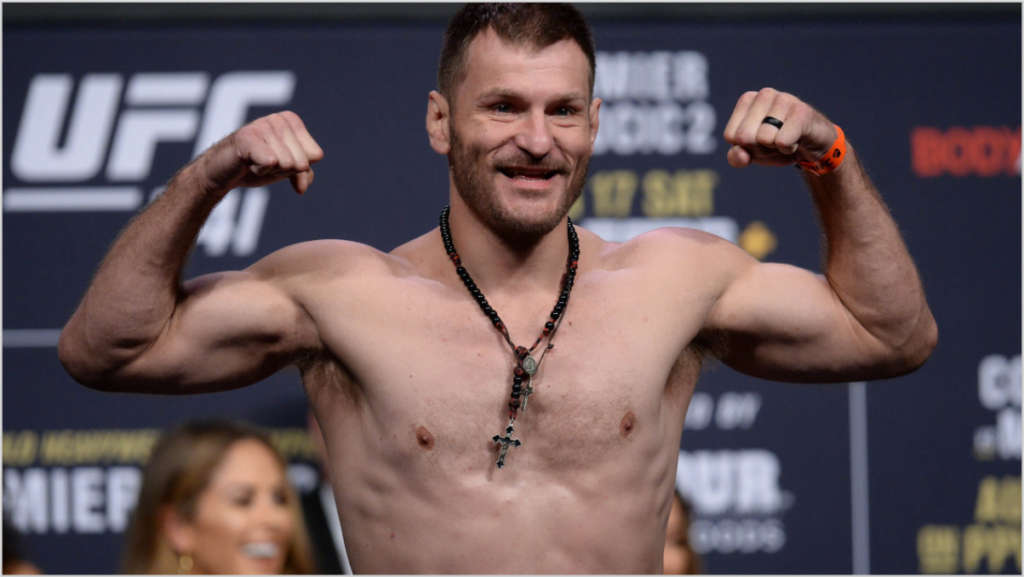 Stipe miocic net worth in 2021 is estimated to be $4.5 million. Stipe miocic is a 6x UFC Heavyweight champion. Who has made most of his money in MMA/UFC fighting.

Stipe has made almost $1 million in almost every title fight he had. he was paid $1,190,000 in last two fight with Francis Ngannou and Daniel Cormier.

He has been known for his boxing and speed in heavyweight division. Stipe is having quite impressive record in most dangerous division of UFC. he has 20 wins with 4 losses and 0 no contest.

Stipe Miocic vs Francis Ngannou 2 was the last fight of stipe, although the fight was not good for him as he was got knocked up by Ngannou. it was a biggest payday of him where he bagged $1,190,000 including his fight salary as well as PPV share.

Stipe miocic vs Daniel Cormier – they both fight each other for total 3 times in there fight career. and it is estimated that stipe has made whooping $3.5 million including fight salary as well as PPV share.

Stipe miocic vs francis ngannou 1 – fortunately this fight was won by the stipe. Stipe dominated this fight by exposing ngannou’s weak wrestling. stipe was paid $600,000 as an fight salary and $150,000 as a PPV share bonus.

Stipe miocic vs junior dos santos – one of the most hyped fight of his career was played in his way. stipe won the performance of the night bonus of $50,000 for this fight along with $600,000 as a fight salary and $100,000 as a PPV share bonus.

There are many other others fight from which stipe had made lots of his money. so, this is how stipe miocic net worth today has reached to $4.5 million. Reference

Stipe Miocic was born on August 19, 1982 at Euclid, Ohio. His parents separated when he was still a child and he was raised by his mother.

In childhood he was encouraged by his mother to stay active in sport. he actively participated in baseball and football eastlake north hike school.

In 2005, During his school days, he was brought as a training partner to wrestle with Dan Bobish in Strong Style MMA Training Centre.

At first stipe trained in mixed martial arts, but soon he switched to boxing. His trainer, Marcus Marinelli, recalled that although he trained alone for several months, he beat boxers with much more experience.

In 2011, Stipe miocic signed a multi fight deal with UFC. at UFC 136 he made his debute against joey beltran where he won that bout with unanimous decision.

Stipe won “Knockout of the Night” award in his second fight of his UFC career, at UFC on Fuel TV: Sanchez vs. Ellenberge.

He won his first “Fight of the Night” award when he fought Stefan Struve at UFC on Fuel TV 5. Unfortunately, the fight didn’t go stipe wanted and he suffered TKO loss.

At UFC 173 Stipe was scheduled to fight with Junior Dos Santos. However, the bout was initially shifted a bit and was expected take place a week later on May 31, 2014, at The Ultimate Fighter Brazil 3 Finale.

Unfortunately, due to an allergy dos Santos pulled out of the fight and was replaced by Fabio Maldonado.

Finally in 2016 Miocic was scheduled for heavyweight title championship at UFC 198. Miocic was underestimated by champion Fabricio werdum and got paid for it.

Stipe Knocked out Werdum whith short right hook when werdum tried chasing him. This was first defeat of werdum since 2011.

Apart from fighting for UFC, Stipe works part time for firefighter paramedic in Oakwood and Valley View. Which he consider to do full time after his retirement from MMA.

In 2016 Stipe married to Ryan Marie Carney at the Divine Word Catholic Church in Kirtland, Ohio. and till date they share beautiful life together.

Stipe & Ryan Marie have one daughter Meelah who also live in the joint family. his mom was croatian and that’s why stipe also understand croatian language. However, he struggles to speak fluently.

Currently, Stipe has not booked for any fight but he is still NO.1 contender for the title. may be after Francis Ngannou vs Ciryl Gane he will get his title shot.

Most probably stipe will fight Francis Ngannou in his next fight for their triology.

Stipe is married to Ryan Marie Carney since 2016,  Ryan Marie completed her medical studies at Cuyahoga Community College in Cleveland. Before starting her medical training, she used to work as a hairstylist and cosmetology instructor.

How much is stipe miocic net worth?

Stipe miocic net worth in 2021 is estimated to be $4.5 million. Stipe miocic is a 6x UFC Heavyweight champion. Who has made most of his money in MMA/UFC fighting.

What is name of stipe miocic wife?

Ryan Marie Carney is the name of stipe miocic wife. they both married in 2016 at Divine Word Catholic Church in Kirtland, Ohio

When is stipe miocic next fight?

As far now, stipe has not booked for any fight. however it is rumored that he will fight the winner of Ngannou vs Gane.

How much is stipe miocic height?

How much is stipe miocic age?

What is stipe miocic record in MMA?

How much is stipe miocic reach?

Stipe is having 80″ of total reach in MMA fighting.