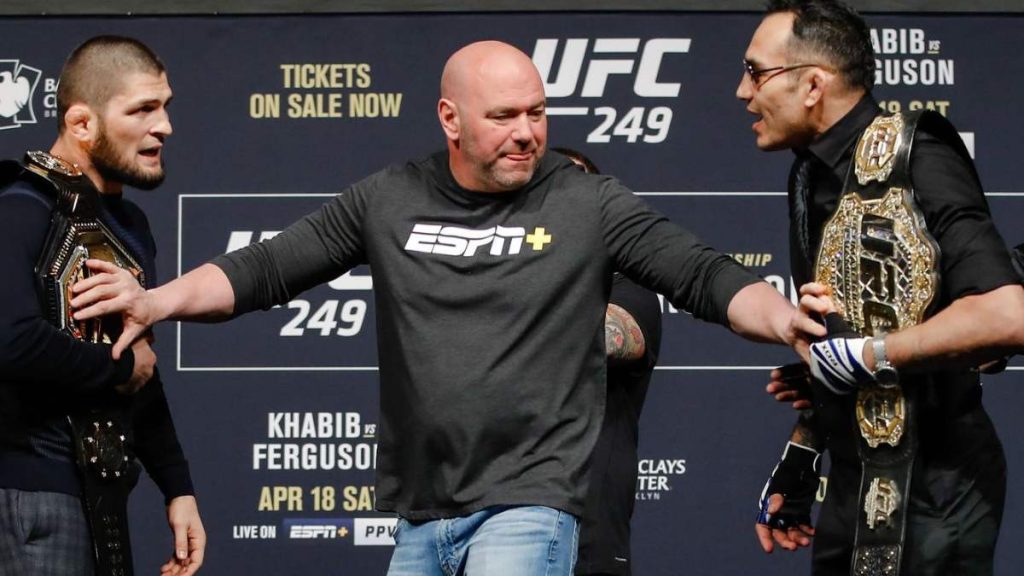 Undefeated Former UFC lightweight champion Khabib Nurmagomedov is willing to come back in UFC but as a Coach of The Ultimate Fighter show.

Khabib Vs. Ferguson is one of the match-up that MMA fans have never got to see. Despite booking this fight for five times this fight never happened. Yes, it was cancelled five times.

They where officially scheduled to fight in 2015, But unfortunately Khabib pulled out from that fight due to a severe rib injury. Then one year from that, Ferguson was forced to pull out as he didn’t get medically cleared. But, That wasn’t the end of story.

For the third time, when everybody was expecting this fight to take place, Tony broke his knee tendon after stumbling over a wire during media scrims.

Nonetheless, This fight was again booked again in 2020 at UFC 242 and everything expected to go right. But, Destiny had different plans, Covid-19 pandemic happened and Khabib was restricted from travelling and once again this fight was cancelled.

Fast forward to 2022, Speaking to ESPN, Khabib has urged Dana White to call him back and finalize booking of coach for next The Ultimate Fighter.

“I like this idea. We can do some stuff. Because right now, it’s like, not too many big stars in UFC right now. Myself, I’m finished. Jon Jones is not there. Henry Cejudo is not there. Daniel Cormier is not there. Of course, I don’t like this guy, but he has a big name… There are only a few people, you know? If me and Tony are going to be The Ultimate Fighter coaches, I think we can create some good content, if they’re interested.”

“I don’t want to give him pressure, but Dana, we have to finish two business: Islam Makhachev and The Ultimate Fighter. Please call me back, brother. Because if you don’t call me back, I’m going to be in Vegas in June. Then you’ll have to send me a message with your location. Be careful, Dana. We have to finish our business. Call me back.”

Khabib seems right here, Even if they don’t fight inside octagon they would definitely produce some high level content. Especially considering the craziness of Tony Ferguson, It will be fun for sure.