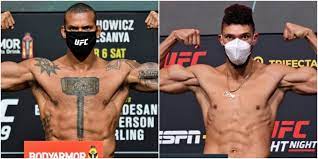 UFC Fight Night 193 live will take place tonight UFC Apex in Las Vegas. Main card starts at 7 p.m. ET. you can watch it on ESPN+ or you can join us here for live updates.

Walker coming off an a first-round KO/TKO victory against Ryan Spann on Sept. 19, 2020. on other hand Santos is on a three fight losing streak to Jon Jones, Glover Teixeira or Aleksandar Rakic.

Both fighters will look forward to put on a best show tonight to chase their UFC gold dream.

Official Result: Kyle Daukaus vs. Kevin Holland ends in no contest (accidental clash of heads) – Round 1, 3:43