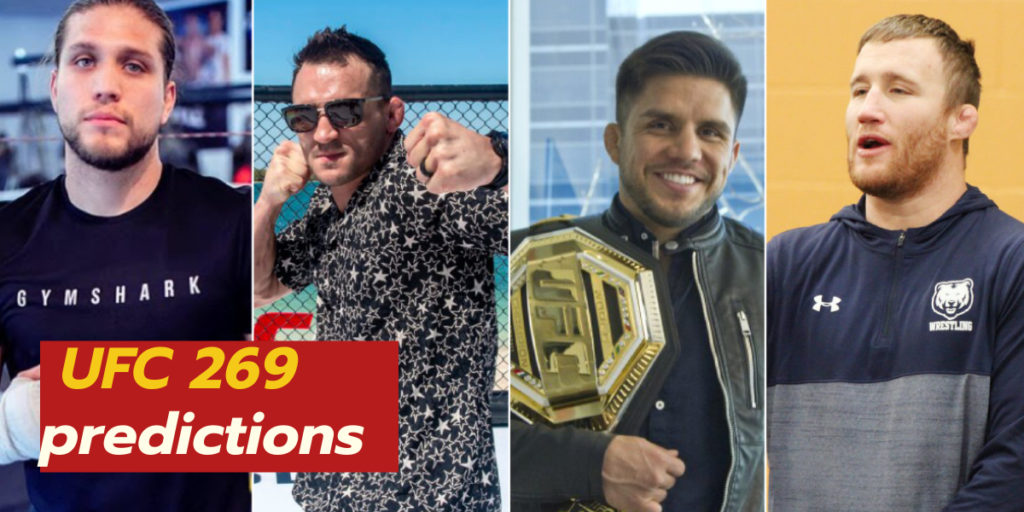 UFC 269 is just a few days away from happening, and the excitement to the fans has been rising day by day. Keeping that in mind, we’ve brought you the UFC 269: Oliveira Vs. Poirier Predictions from your favourite UFC fighters, Including Henry Cejudo, Justin Gaethje, Michael Chandler, Brian Ortega and AKA coach Javier Mendez.

We have also made our prediction, which you can read by clicking here, but it will be more interesting to listen to your prediction, so please write us in the comment box below to who you think wins at UFC 269 main event.

First up, Brian “T City” Ortega, a long-time friend of Dustin Poirier, has fought many times on the same card as Dustin. Believes he likes Poirier, so he is rooting for him.

“I love Poirier, Like i have fought with him since new orleans, We’ve fought on same cards and We’ve won together” Said by Brian “T City” Ortega. “We’ve a thing like Yo, everytime we fight together we win so i see hi, I’m a Poirier fan. He deserve it he is such a good human being both guys are you know but i go more to who i know and who i like,”

He believes both fighters are strong in their area, so anyone who dictates the fight is favourite to win.

“That’s an interesting fight; Charles is a great fighter. They have different styles depends on who can dictate where the fight ends.”Said by AKA Coach javier mendez “You know, in a close, it’s going to be Dustin, and in the range, it’s going to be Oliveira. On the ground, you know Charles has a slight edge, so that’s a tough fight.”

Lightweight contender, who Charles Oliveira defeated to win Lightweight Title, believes Oliveira is a good fighter. Still, he lacks the longevity where Dustin Poirier will expose him.

“I think they both well rounded; I think Poirier has got little more of that kind of dog in him when the fight gets into the thick of it.” Said Michael Chandler. “Obviously Charles Oliveira beat me in the second round, right you know, very soon into the second round, so we didn’t see the longevity in a fight like that. We’ve seen him going three rounds with Tony Ferguson but that was aone sided affair. I think the fight with Dustin Poirier; He puts hands on him pretty solidly in the first couple of rounds and kind of starts putting on the Charles. I think Poirier wins that fight in the probably third or fourth round.”

Former Interim Lightweight Champion and Current number one contender Justin Gaethje wants Dustin Poirier to win not because he likes him but because he wants to fight him again to avenge his loss.

Gaethje Said”It’s going to be a good match. I think Poirier will win. You know I want Poirier to win. If I can get that Poirier win back, that will give me Poirier & Alvarez fights back, Alvarez is gone, but Poirier beat him last, so that’s the way for me to get those fights back. Khabib’s gone, I can never get that one back, but for right now, I can get the Dustin and get back the two losses on my record. So, I want him to win.”

Gaethje further admired the journey of Oliveira but he sees a quitter in him “Oliveira is good. I mean, I’ve said what I needed to say. I mean, he is a quitter. He has shown us five times at least in his career. But he has done great things. He has been here since day one. I think when I was wrestling in the college, barely starting, He was already in the UFC fighting.” Said Justin Gaethje

Tripple C Henry Cejudo has also shared his pick for the upcoming Oliveira Vs. Poirier for the lightweight bout.

“Oh my god, That’s going to be an entertaining fight. I think, I do believe that Charles Oliveira is a more technical fighter. He has got some more skills, he has got more tools in his arsenal, But Poirier has been through Conor McGregor, Justin Gaethje. He has been through some of the toughest fighters in UFC, and he is that war proven, and that’s the only thing that scares me for Charles Oliveira. Even though I am going with Charles Oliveira, and I really like Charles Oliveira, I feel like Dustin Poirier. He just has that grit that I wish Charles oOliveirahad.” Said by Triple C Henry Cejudo