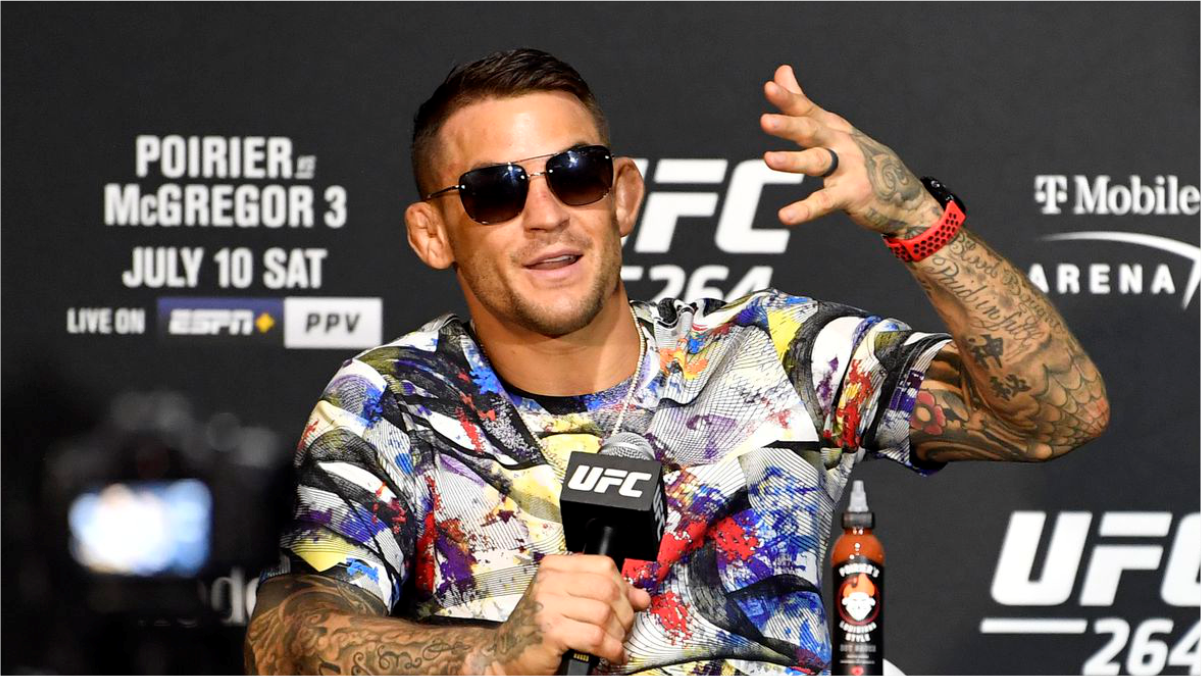 Dustin Poirier is an American professional mixed martial artist, Who is currently signed with UFC and he is actively fighting in the Lightweight Division.

As of 2022, Dustin Poirier’s MMA record is 28-7-0 (1 NC), he is still actively competing in UFC’s lightweight division so his record will be improving with time.

Dustin Poirier’s next fight is set to be against Michael Chandler at UFC 281 at Madison Square Garden.

Dustin Poirier’s career earnings to date 2022 are around $17 Million. He is still actively competing in UFC’s lightweight division and is one of the nicely paid athletes on the roster.

At UFC 269 Dustin Poirier was defeated by Charles Oliveira in third-round submission.

On July 10, 2021, at UFC 264, Dustin fought Conor McGregor for the third time and won this fight in a controversial fashion. Actually, it was a doctor’s stoppage but he was still given KO.

At UFC 257, Dustin Poirier fought Conor McGregor for the second time in his career.

On April 14, 2018, at UFC Fight Night, Dustin had one of the toughest fights of him. Gaethje had his moments in the fight, but Dustin outstruck him to get this victory.

At UFC 211: Miocic vs. Dos Santos, Poirier fought Eddie Alvarez but fight was called off to no contest.

Dustin Poirier was born on January 19, 1989, in Louisiana, His father was French and his mother was American.

Dustin attended Northside High School for a short time and he dropped out in the ninth grade because of repeatedly got into trouble and street fights.

He started his MMA training at the age of 16 and quickly compiled a 7-0 MMA amateur record in 2009.

On August 18, 2010, at WEC 50 Dustin suffered his first professional loss to Danny Castillo.

As a WEC merger with UFC, Poirier was also brought to UFC. He replaced Jose Aldo to fight number 1 ranked Josh Grispi. Poirier defeated Josh in his UFC debut by unanimous decision.

In 2011, Poirier was scheduled to fight Rani Yahya, But due to an injury, Rani pulled out of this bout and was replaced by Jason Young. Poirier defeated Jason by unanimous decision.

Dustin Poirier is married to Jolie le Blanc and they have a five-year-old daughter named Parker Noelle Poirier.

They together live in Louisiana, Poirier is still an active member of the American Top Team and trains there for all of his fights.

Dustin Poirier and Jolie Poirier started their charity NGO “The Good Fight Foundation” with agenda to raise money for poor people and to help them benefit in every possible way.

How much is the net worth of Dustin Poirier?

What is the MMA record of Dustin Poirier?

Who is the wife of Dustin Poirier?

Dustin Poirier is married to Jolie Poirier on 4th of September in 2009.

How old is Dustin Poirier?

When is the next fight of Dustin Poirier?

Dustin will be fighting Charles Oliveira on Dec 11 for Lightweight Championship.

What is the name of Dustin Poirier’s Daughter?

Parker Noelle Poirier is the name of Dustin Poirier’s Daughter.

How much each year does Dustin Poirier and his wife get paid from the charity the good fight Foundation each year?

It is estimated that Dustin Poirier and his wife Jolie Poirier have to date raised around $1 Million in charity including $500,000 from Conor McGregor and $20,000 to Charles Oliviera in Brazil.

What will Dustin Poirier get paid for UFC 264 fight?

How many times did Dustin Poirier fight on the undercard in the UFC?

On September 17 2016, Dustin Poirier headlined his first ever against Michael Johnson. Before this fight he had 16 fights in UFC.