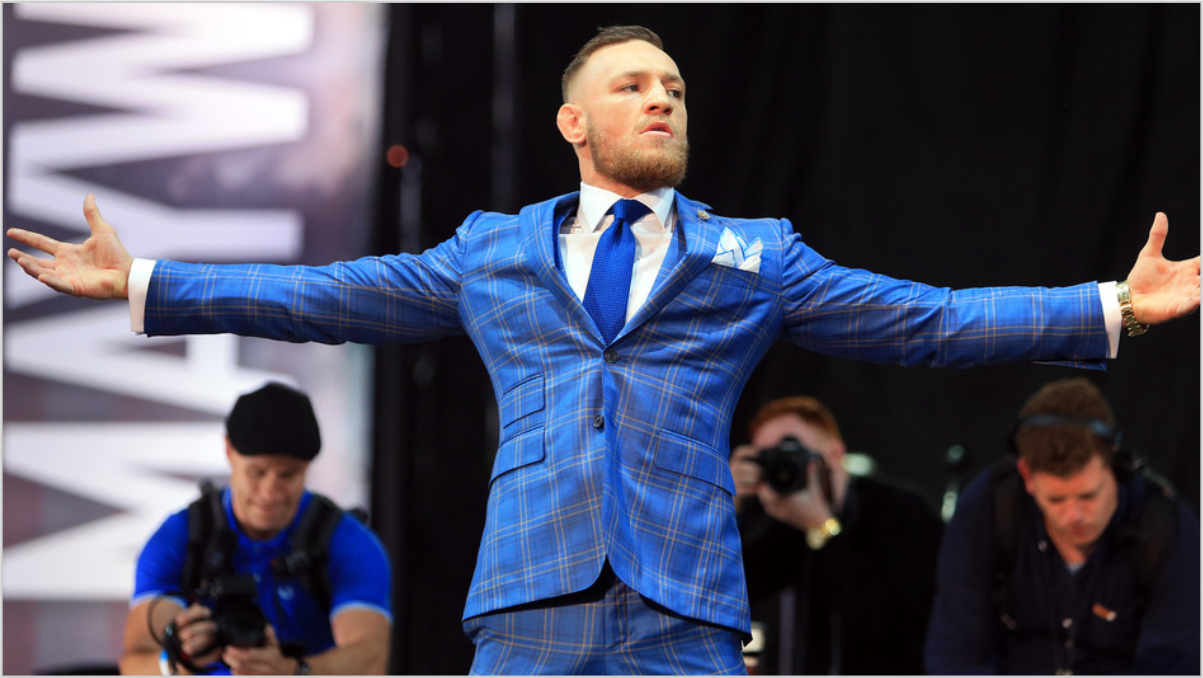 Conor McGregor Net Worth in 2022 is estimated to be around $300 Million. He is the highest-paid MMA superstar and made most of his net worth from MMA fighting and business ventures like Proper Twelve Whisky, MacLife, McGregor Fast, Black Forge Inn & McGregor Promotions.

UFC 229 was his biggest payday when he challenged undefeated UFC Lightweight Champion Khabib Nurmagomedov. He made a whopping $28,480,000 from this fight.

Conor McGregor is an Irish professional mixed martial artist and the first fighter ever to hold two UFC belts simultaneously.

Conor McGregor is the most popular MMA fighter with a professional record of 22-6-0. Apart from his double champ status, he is known for his most famous fastest knockout of Jose Aldo which came in only 13 seconds of his fight.

According to various sources, It is estimated that Conor McGregor has earned $108,731,113 throughout his fighting career in MMA. His highest pay day was when he fought Khabib Nurmahomedov at UFC 229, Where he earned $28,480,000.

On July 10, 2021, at UFC 264, Conor McGregor fought Dustin Poirier for the third time. Unfortunately, the fight didn’t go in his way, and the bout was called off after Conor broke his leg at the end of round one.

At UFC 257, Conor McGregor fought Dustin Poirier for the second time. He lost this fight by second-round knockout.

On January 18, 2020, at UFC 246: McGregor vs. Cowboy, Notorious finished Cowboy in the first round in a one-sided affair.

UFC 229 was one the biggest PPV of UFC where Conor McGregor faced undefeated Khabib Nurmagomedov, and the Russian defeated him in the fourth round by submission.

UFC 205, Conor McGregor captured his second belt by defeating Eddie Alvarez. Conor Knocked him out in the first round of their fight.

At UFC 194 Conor McGregor fought Jose Aldo, where he captured the Featherweight title by Knocking out Aldo in record-setting 13 seconds of the fight.

At UFC 189 Conor McGregor fought Chad Mendes for the interim belt, where he knocked him out in round number two.

At UFC 178, Conor and Dustin fought for the first time. Conor knocked out Dustin Poirier in round number one.

At UFC 178: Johnson vs Cariaso, Conor McGregor defeated Brandao in the first round of their scheduled five-round bout.

On April 06, 2013, at UFC on FUEL TV: Mousasi vs Latifi, Conor made his debut, he knocked out Marcus Brimage in the very first round of their fight.

Conor McGregor fought Floyd Mayweather in a cross-promotional bout of boxing. It is estimated that Conor was paid a total of $130 million, including his disclosed salary of $30 million.

Conor McGregor is an Irish MMA superstar, Former UFC double division champion, and the wealthiest athlete on the planet.

Mcgregor has headlined 5 out of the 6 highest-selling UFC PPV events. In 2021, Conor was listed as the number one Forbes highest-paid athlete globally.

McGregor is a brother to two sisters. Erin McGregor and Aoife McGregor. McGregor has been living with his fiancee Dee Devlin since 2008. They have three children: Conor Jr, Croia and Rian.

Conor Anthony McGregor was born in Crumlin, Dublin, on 14 July 1988; his parents’ names are Tony McGregor and Margaret McGregor.

He was born in Crumlin and went to Irish-speaking schools- the Gaelscoil Scoil Morloga located in Harold’s Cross, at primary level.

For secondary education, he went to Gaelcholaiste Colaiste de HID at Tallaght. There he also discovered his love for football and played the sport.

As a child, the team he played for was Lourdes Celtic Football Club. At the age of twelve, He also started boxing at the Crumlin Boxing Club as an option to protect himself from the bullies and increase his self-confidence.

McGregor relocated with the family to Lucan, Dublin, in 2006. Then, he started a plumbing apprenticeship. While at Lucan McGregor, he met future UFC fighter Tom Egan and they soon began to train in mixed martial art in conjunction.

In 2007, Conor made his MMA debut against Kieran Campbell in Dublin’s Irish Ring of Truth. He was only 18 years and won that fight by Knocking out his first opponent.

Later in 2008, Conor joined Straight Blast Gym (SBG) in Dublin, and since then, he has been trained by one of the best coaches in the world John Kavanagh.

On March 9, 2008, Conor McGregor knocked out Gary Morris in the second round in the lightweight division. But his win streak didn’t continue soon after the back-to-back victories. He suffered the submission loss to Artemij Sitenkov.

Later he made his successful featherweight debut against Stephen Bailey, Which made coach Kavanagh convince his family to pursue an MMA career.

2011-2012 was a great year for the Notorious. During this tenure, he won CWFC Featherweight and Lightweight belts and went on to maintain 8 fight winning streak.

In 2013, Dana White visited Ireland to receive a Gold Medal of Honorary Patronage from Trinity College. He got to know about the Popularity of Conor in Ireland and was requested by many fans to sign him for the UFC.

Later, Dana met with Conor McGregor, and within a few days, UFC signed Conor for their promotion.

On 6 April 2013, Conor knocked out Marcus Brimage in his first appearance in the UFC. In his second UFC fight, he faced promotions best Max Holloway, and surprisingly Conor defeated him by unanimous decision.

On January 30, 2015, Conor was scheduled to fight for the title against King of Rio, Jose Aldo. They both did 12 days world tour for this fight, starting from Rio de Janeiro and ending in Dublin, Ireland.

However, Jose Aldo pulled out of the fight due to an injury and was initially replaced by Chad Mendes.

Conor defeated Mendes by TKO in round number two of their scheduled five-round bout.

On 12 December 2015, Conor McGregor fought Jose Aldo for the Featherweight Championship. He knocked out Aldo in a record-setting 13 seconds of the first round.

After a year of winning his featherweight belt, Conor moved up in the division to become the first-ever two-division champ in UFC.

At UFC 205, Conor knocked out Lightweight champion Eddie Alvarez in the first round to become UFCs first-ever two-division champ.

Conor Mcgregor Fought Floyd Mayweather in the most anticipated boxing fight. On 26 August 2017, at T-Mobile Arena in Paradise, Nevada, they were squared off against each other.

In the scheduled 12 round bout, Conor was knocked out by Floyd Mayweather in round number 10 due to low cardio.

What is Conor McGregor Net Worth?

Conor McGregor’s Net Worth is estimated to be around $300 Million. He is the highest-paid MMA superstar and made most of his net worth from MMA fighting and business ventures like Proper Twelve Whisky, MacLife, McGregor Fast, Black Forge Inn & McGregor Promotions.

How old is Conor McGregor?

What is the current MMA record of Conor McGregor?

22-6-0 is his current MMA record of Conor McGregor.

How many kids do Conor McGregor have?

When is the next fight of Conor McGregor?

Conor McGregor’s next fight is rumoured to take place in summer 2022 against Dustin Poirier, Nate Diaz or Tony Ferguson.

To date they have fought three times Conor has won their first fight and the next two were won by Dustin Poirier.

Who is Conor McGregor’s wife?

Conor Mcgregor has been in an active relationship with his fiancée, Dee Devlin, Since 2008, and they have three kids together.

Conor McGregor is 5 feet 9 inches tall in the height.

Who was winning before Conor Mcgregor broke his leg Dustin or Conor?

The fight was fifty-fifty before Conor broke his leg, In the early round Conor did really significant damage to Dustin’s leg by vicious side leg kicks. then once Poirier took him to the ground Dustin had scored in his favour.

Who was the backup fighter for Khabib vs McGregor?

Justin Gaethje was the backup fighter for Khabib vs. McGregor fight.

Will the Poirier McGregor 3 fight ever be aired for free?

No, there is a zero per cent chance of the Poirier vs. McGregor 3 fight would be aired for free. you can buy PPV or watch it for free whenever UFC released it on youtube.

Did Conor win against Nurmagomedov?

No, Conor did not win against Khabib Nurmagomedov, He was submitted by submission in the fourth round.

How many wins does Poirier have over Mcgregor?

Dustin Poirier has two wins over Conor McGregor, and Conor has one victory over Poirier.

How many fights has Conor won since going up from the original weight class?

Conor McGregor has a total of seven fights in Lightweight, out of which he has won only three fights. which are against Nate Diaz, Donald Cerrone & Eddie Alvarez.

What was Conor Mcgregor’s breakout fight?

UFC194 Jose Aldo vs. Conor McGregor was a breakout fight for him, since then he emerged as a superstar.

Did Dustin Poirier beat Mcgregor in the last fight?

4 thoughts on “Conor McGregor Net Worth 2022, Career Earnings and Salary”