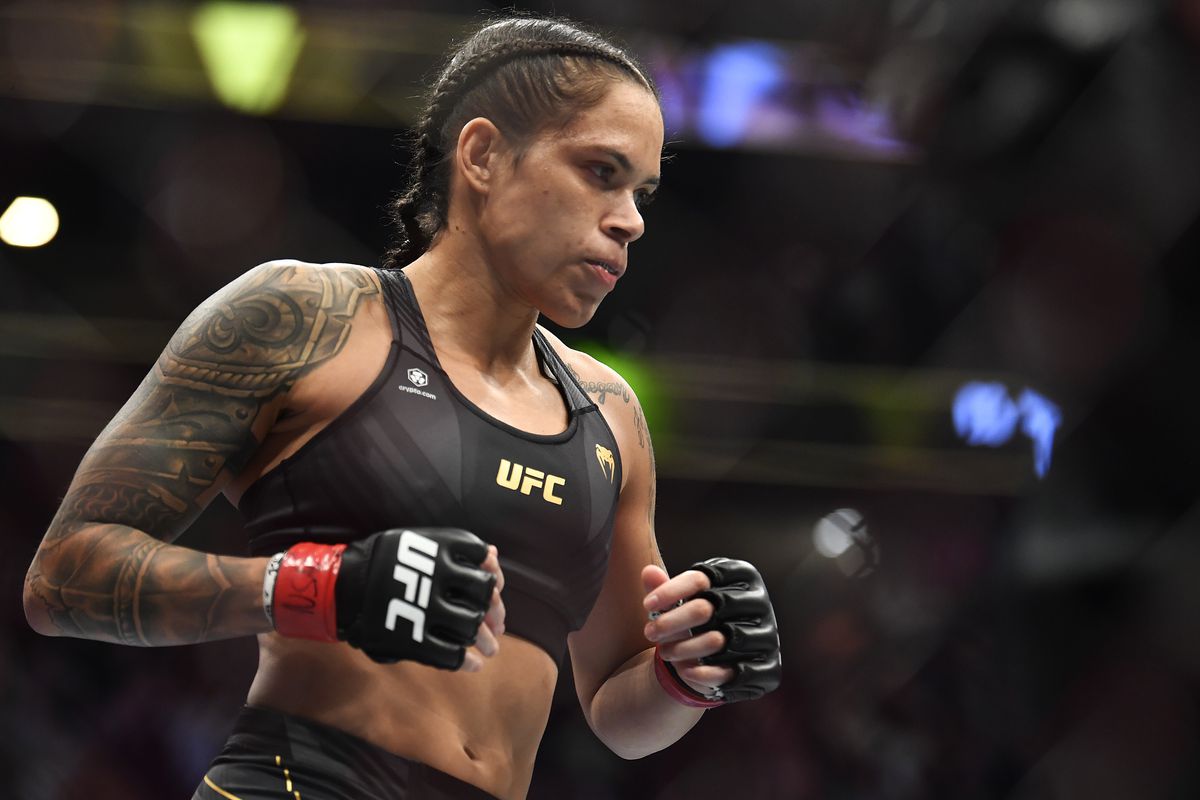 Amanda Nunes net worth in 2022 is estimated to be approximately $8.5 million. It is reported that Amanda Nunes has earned most of her net worth by fighting for the UFC and many other MMA promotions.

She is considered one of the greatest female fighters as she has recently reclaimed her double champ status by defeating Julianna Pena UFC 277.

Amanda Nunes’ have career earnings of more than $8,954,000. She is one of the highest-paid women fighters in the UFC.

Amanda Lourenço Nunes is a 33-year-old Brazilian professional mixed martial artist. She is currently competing in the UFC’s bantamweight and featherweight divisions in the women’s category.

She is the first-ever woman to hold two UFC titles simultaneously and defend both of them actively. Only Conor McGregor, Daniel Cormier & Henry Cejudo has won two belts simultaneously in UFC history.

According to various sources, Amanda Nune’s career earnings are $8,954,000. She is one of the nicely-paid athletes in the UFC with an average salary of $400,000.

Amanda Nunes is still actively competing in the UFC’s lightweight division and is a former two-division UFC champion.

At UFC 269, Nunes was defeated by Julianna Pena. This was her first defeat after winning a straight 12 fights.

At UFC 250, Amanda Nunes successfully defended her title against Felicia Spencer. She won this fight by unanimous decision.

On July 06, 2019, at UFC 239: Jones vs. Santos, Amanda Nunes fought former champ Holly Holm. She won the fight by impressive KO in round number one.

Amanda did her yet another defence against tough Cristiane Justino on December 29, 2018. She won this bout by first-round KO, which also earned her a performance bonus.

On May 12, 2018, Amanda Nunes defeated Raquel Pennington by an impressive fifth-round knockout.

As of 2022, Amanda Nunes’s MMA record is 21-5-0. She is still actively competing in the UFC’s women’s bantamweight & featherweight division so her record is set to improve with time.

Amanda Nunes’s Next Fight is yet to be scheduled, she has recently defeated Julianna Pena at UFC 277 and she has stated that she will be taking a little bit of break from competing.

Amanda Nunes’s Next Fight might happen against Julianna Pena for their trilogy bout or Valentina Shevchenko challenging her for the bantamweight title.

Nina Ann Nunes is the wife of UFC GOAT Amanda Nunes. She also competes in the Women’s Straw-weight division.

Nina Nunes was born on December 3, 1985 in Weston, Florida, the United States. She and Amanda now have a beautiful girl named Raegan Ann Nunes.

Amanda Nunes is the third daughter of Ivete and Sindoval Nunes. She was born in Pojuca, a small town outside of Salvador, Bahia, Brazil.

Her mother and father got separated when she was four years old. She stayed with her mother.

Her mother used to sell hot-dogs, sweets, and beauty products to raise her children.

In her childhood, Amanda used to be a very energetic kid. She also used to get involved in street fights.

Her mother enrolled her in the Brazilian martial arts capoeira when she was five years old. by the age of seven, she started karate.

She continued her studies along with boxing and other martial arts till she turned sixteen. Then she started her professional Brazilian Jui Jisu and moved to Salvador.

In 2007, She started her MMA tarining at Edson Carvalho’s gym. She got many offers from MMA promotions from USA and she ultimately ended up moving to USA with UFC

What is Amanda Nunes net worth?

Amanda Nunes net worth in 2022 is estimated to be approximately $8.5 million. It is reported that Amanda Nunes has earned most of her net worth by fighting for the UFC and many other MMA promotions.

No, Ronda Rousey never defeated Amanda Nunes. Ronda lost by KO to Amanda Nunes in round number one.

Amanda Nunes recently lost to Julianna Pena at UFC 269. Apart from this loss, Amanda has lost to Cat Zingano and Alexis Davis.

How tall is Amanda Nunes?

What is Amanda Nunes record?

Amanda Nunes’s Next Fight is yet to be scheduled, she has recently defeated Julianna Pena at UFC 277 and she has stated that she will be taking a little bit of break from competing.

When is Amanda Nunes next fight?

According to various sources, Amanda Nunes has accepted her rematch against Julianna Pena. They are both coaches on Ultimate Fighter Season 30. They are expected to fight in July or August of this year.

How old is Amanda Nunes?