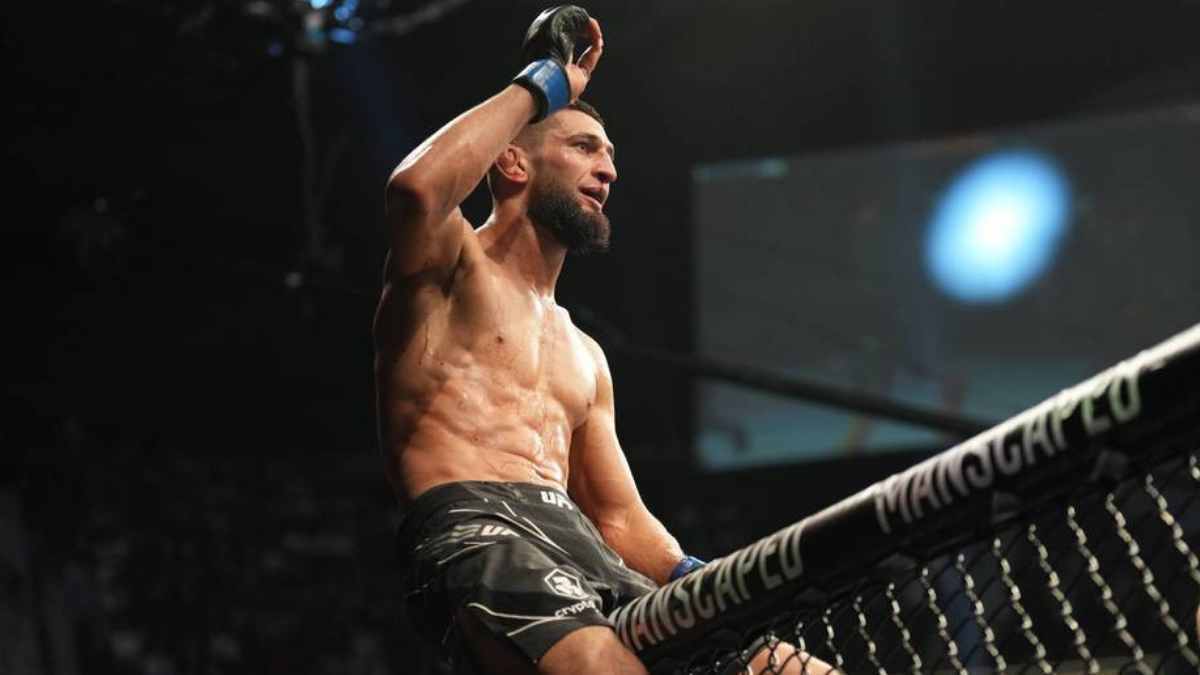 Khamzat Chimaev’s net worth in 2022 is estimated to be around $1 million. However, he has just started his career in the UFC and his biggest paydays are yet to come.

He fought Gilbert Burns at UFC 273, which was his biggest payday. He made a whopping $350,000 from this fight.

Khamzat Khizarovich Chimaev is a Swedish professional mixed martial artist and freestyle wrestler who competes actively in the welterweight division of the UFC.

Khamzat Chimaev with no beard is one of the most popular memes or troll images that has been circulating on the internet recently.

This picture of Khamzat Chimaev with no beard shows he has no chin at all. But that’s not the reality.

According to various sources, it is estimated that Khamzat Chimaev has earned $759,000 throughout his to-date fighting career in MMA.

Khamzat Chimaev fought Li Jingliang at UFC 267. He defeated Jingliang by dominating the rear-naked choke in round number one.

This was his third bout in the UFC. He defeated Gerald by first round KO. The card was headlined by Tyron Woodley Vs. Colby Covington.

Khamzat made his second appearance against Rhys McKee, He defeated Rhys by first round KO.

Khamzat Chimaev made his UFC debut against John Phillips, He submitted John by D’Arce choke in round number two.

Khamzat Chimaev is actively practicing Islam religion, He is also always seen with his Muslim beard.

Khamzat is originally from Chechen Republic of Russia, He was migrated in 2013 to the Sweden.

No, They are not related to each other. But yes they are both from same country (Russia) Now Chimaev is Swedish.

They have more common friends in between like Artem Lobov.

He was born in the Chechen Republic of Russia. He started wrestling in his early childhood at the age of five.

Later, he represented Russia at the Russian National Championships at the junior level. where he won a bronze medal.

At the age of 18, he migrated to Sweden, and now he is representing Sweden in UFC MMA fighting.

Chimaev wrestled in multiple clubs in Sweden. He became one of the best wrestlers in the country.

In the 2016 and 2017 Swedish Freestyle National Championships, he won a gold medal in the 86 kilogramme weight group.

In 2018, he won another gold medal at the Swedish Freestyle National Championships in 92 kilograms.

In an recent wrestling bout against fellow UFC fighter Jack Hermansson, He dominated Hermansson and won it by points.

At the age of 23, Chimaev started his training at the Allstar Training Center in Stockholm. Now in 2022, he is accompanied by Darren Till.

His first fight was against future IMMAF World Champion Khaled Laallam, whom he defeated by submission in the second round.

He won his next two amateur fights, one by submission and one by technical knockout.

Khamzat Chimaev also has a brother named Artur, who is also actively competing in wrestling tournaments.

Also, there is a story behind his scar on his lip. The scar was left on him when he fell from a concrete staircase and the injury was heavy.

Chimaev is close to Chechen leader Ramzan Kadyrov. Chimaev was given a Mercedes-Benz, which he crashed months later.

How much is the net worth of Khamzat Chimaev?

Khamzat Chimaev’s net worth in 2022 is estimated to be around $1 million. He has just started his career in the UFC and his biggest paydays are yet to come.

What is the age of Khamzat Chimaev?

Khamzat Chimaev is 29 years of old in the age.

What is the MMA record of Khamzat Chimaev?

11-0-0 is the current MMA record of Khamzat Chimaev.

How much is the height of Khamzat Chimaev?

Khamzat Chimaev is six feet four inches in the height.

Is Khamzat Chimaev is married?

No, Khamzat Chimaev is not married yet.

What weight does Khamzat Chimaev walk around at when’s he’s not fighting?

Khamzat Chimaev walks around 180-185 lbs when he is not cutting down his weight or not fighting.